Tabito Karasu ( , Karasu Tabito?) is a supporting character of the Blue Lock (Manga). 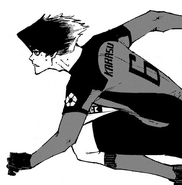 Karasu is a tall and lean young man with dark blue hair with a spiky purple top and has a mole under his right eye. His appearance is supposed to somewhat resemble a crow.

At Blue Lock, Karasu wears the standard issued body suit (black with gray stripes) and tracksuit. During Second Selection, he wore Team Red's #69 jersey and wore Team B's #69 white jersey during the Third Selection. Only once the Japan National Representative match begins does he don an official blue Blue Lock player uniform with the jersey #6.

Karasu tends to look down on people he finds 'mediocre'. He is wary of his surroundings and is able to control and produce chemical reactions with those around him. He is intelligent, however has a sharp tongue and never misses a chance to insult someone, whether friend or foe. He has his own rules that he forces upon others to make matches go as planned. He dislikes it when anything goes wrong, even if it doesn't make a big difference so it looks to others like he is always complaining.

During the U-20 match, Karasu showed his leadership ability on defense, often communicating with the other defensive players to strategize against the quickly incoming U-20 players. He commands players like Yo Hiori and Kenyu Yukimiya in terms of attacking and defending, even if the players are aware of what to do. He also is willing to take every advantage when he asked the referee to card Ryusei Shidou for happening to kick Rin Itoshi in the face.

Sharp Analytical Ability: Karasu is renowned for his tactical shrewdness, having a reputation for targeting an enemy team's weakest link/player and focusing his plays against them (as stated by Hiori). His analytical ability was at such a level (along with his ball-keeping), that Ego made the decision to position him as the defensive midfielder of the Blue Lock 11, to act as the beating heart of the team, transitioning from defense to offense. Karasu has demonstrated an incredible grasp of tactics, being able to breakdown the U-20's defensive set up and the likely steps they will take to prevent an attack. After doing so, he was able to organise an attack with both Otoya and Chigiri to break through their defence, leading to Blue Lock's second goal. Karasu has also shown good awareness, knowing when to stall in the defence (against Sae), giving his team time to organise, as well as when to join the offensive line, providing an extra option.

Expert Ball Control: Karasu has the best ball-keeping sense in Blue Lock, due to his spatial and tactical awareness and his unique ability to control space with his hands. By gauging the distance between himself and his opponent, Karasu uses his body (and more specifically his arms) to block them off from the ball, controlling the space and enabling him to either steal the ball from them or dribble past.