Baro is a very selfish and arrogant type of forward who strives to be the star of the field at all times. When first arriving at Blue Lock, he was a member of Team X during First Selection and tied for top scorer in his designated stratum. After the Blue Lock Eleven played against the Japan U-20, Baro is ranked as one of the top players in Blue Lock. 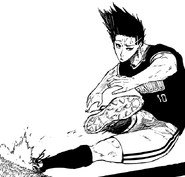 Baro is tall with red eyes and long black hair that he wears up in a spiky style. When he lets it down, his hair is neck length. Baro also has a muscular build, due to his dedicated training regimen, keeping up his physical fitness. At Blue Lock, Baro wears the standard-issued body suit (black with gray stripes) and tracksuit. During the First Selection, he wore Team X’s blue #10 jersey and wears Team X's gray-capped cleats. During Second Selection, he wore Team Red's #18 jersey and that later switched to white when he joins Isagi's team. During Third Selection, Baro wore Team B's white jersey and while on bench for the Blue Lock Eleven, wears his bodysuit and a long black trench jacket. Once subbed in for the second half for the Japan National Representative Match, he dons the official Blue Lock #13 jersey.

In accordance with his perception of himself as "the King", Baro has an imperious personality, seeing himself as above others. Initially, Baro perceived all others on the field as supporting roles, moving for the sake of his own goals, with himself being the main actor on the stage. He is obsessed with pursuing his own soccer, but doesn't actually really like it or have a passion for it. Baro is motivated by the need to face others who play soccer and to use his goals to drag them off the seat of main actor, and replace them. The pleasure obtained through this is something Baro believes is only for the strong. Baro is the kind of player who refuses to pass the ball and whenever he loses possession he endeavors to steal the ball back or steal a goal.

After his symbolic loss to Isagi, where he felt he lost his position as the main actor, Baro adopted a more villainous approach to his own philosophy. He is now willing to adopt a "villain" role if it means stealing back that position. Despite this new wicked take, Baro also matured after that match, being willing to admit when he was beaten and asking Isagi about the soccer he wants to play. Baro was visibly upset when he did not make the Blue Lock Eleven lineup, despite Isagi doing so and has since been focused and biding his time to play. When Baro is finally subbed in to play the Japan U-20 he still has his overly critical and rude demeanor.

In keeping with his obsessive personality, Baro is a perfectionist when it comes to controlling his environment and routine. He keeps constant order in his surroundings, cleaning and organising his living space within Blue Lock and getting angry at those who don't. This also extends to the bath area and controlling how people behave within it. Baro's obsession also extends to his training, where he is diligent and stoic. He always performs an extensive routine of physical fitness training, to maintain his strength.

Baro's physique enables him to hold up the ball and physically contest other players. His charging ability allows him to dribble and create chances for himself. His shooting and villainous style enable him to finish off team moves, by devouring his teammates. Baro has one of the best physiques in Blue Lock, as well as having one of the best techniques at his age in Japan, as stated by Anri Teieri. Often Baro is given the freedom to play and devour who he wishes on the field, as shown during the Second Selection, as well as by Ego telling Baro to disregard the team's plan and focus on devouring Isagi against the Japan U-20.

Middle Shot: Baro's main method of scoring is his powerful and accurate shot, from a position near the middle of the goal. Baro can target the top right corner with incredible reliability, being almost guaranteed to score within a specific area of the goal (29 meters, near the middle). When outside of this specific area however, Baro's accuracy can decrease sharply. He has performed this shot directly from kick off, although it was saved. He has also shown that he can change the aim of the shot, to the top left corner, but this again suffers from a decrease in accuracy. And finally, he performed this shot when he was too far to the side of his range and it hit the post.

Charging Skill: Baro has the ability to create the space for his own shots, by charging through an opponent's defense and into a range for his middle shot. He has multiple attributes and techniques which contribute to his overall charging ability. Baro was able to charge through two of the Iron Wall Quartet, while holding them back, to steal a goal.

Baro briefly entered the flow state during the Second Selection, when he was pushed to his limit and forced to adapt his philosophy. During this state, he first unveiled his villainous soccer style, charging through three players, whilst devouring Isagi, to go on to score the winning goal. His most impressive goal was when he charged through two defenders while holding them back, while standing on one knee to score a surprise goal.

Villainous Soccer: A selfish and unpredictable playing style, which involves Baro "devouring" his own teammates for the sake of his own goal. On the field, Baro will look to where he can steal the ball from his teammates, to capitalise on their positioning and devour them. He can also take this a step further, by observing the way his team evolves their plays and interrupting that process, which he did to score a goal in the U-20 match. Baro developed this playing style when he was forced to go to a new level, at the prospect of Isagi stealing his in the spotlight. This style makes Baro a complete irregularity on the field, making it impossible for even Rin to predict his movements. In fact, the more knowledgeable the opponent is about football, the more likely they are to be overcome by this ability, as it circumvents all conventional wisdom of the sport.