Back in high school, Nagi seemed to be a loner who enjoyed being on his phone but later met his long term friend, Reo Mikage, and started playing football with him casually in exchange for money. His main goal is to play football and keep finding strong opponents to play against to satisfy his curiosity and test his ever growing skills.

When he first arrived to Blue Lock he was a member of Team V and was the best player in his designated stratum. After the Blue Lock Eleven played against the Japan U-20, Nagi is ranked as one of the top players in Blue Lock. 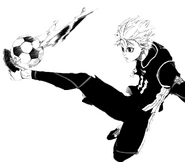 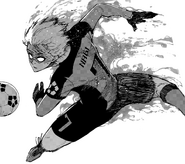 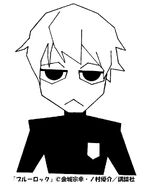 Nagi is a noticeably tall teenager being taller than Yoichi Isagi yet younger than him. Nagi is shown to have short white hair that leaves a V-shaped fringe in between his eyes like Isagi. He has gray colored eyes with large irises.

Back in high school, Nagi wore a school uniform consisting of a white blazer with a cascading layer star pattern on the collar though he wore a dark hoodie under it instead of a dress shirt and tie. He wore the dress pants and dress shoes as well.

Nagi is an unnaturally talented soccer player with amazing reflexes, good speed, and jumping skills yet despite this, he initially does not want to put in any effort into soccer such as training and belittles those who are weak and talentless at the game. He does not even know much about the best soccer players in the world, much to the chagrin of his competitors. Initially, he is shown as indifferent to playing soccer and becoming the best striker, and would rather play video games or skip training.

However, after playing in the match against Team Z, Nagi starts to take initiative and tries to score goals on his own. This only happens because he notices that his teammate, Reo Mikage, seems to be at a loss against the opposing team. Despite his initially indifferent exterior, Nagi strives to improve his soccer skills as a result of his team's loss to Yoichi Isagi. This drive to improve follows him in later arcs, and he even tarnishes a friendship because of it.

Nagi does seem to care about his friends and teammates, especially Reo Mikage even though their relationship turns rocky from the Second Selection onward.

With Nagi's, perfect ball control, flexible movements, and technical ability he is able to breathe life into even the most difficult or hopeless plays. He alone has made the most outrageous goals in Blue Lock due to this skill and he continues to evolve into a creative playmaker.

Perfect Ball Control: In football, to be in control of the ball is of great importance to every level of player. The ability to control an awkward bouncing ball quickly and effectively gives the player with the ball the immediate advantage. The first touch is often the difference between success and failure in most situations during the match. Nagi has exceptional ball control and demonstrates it on a constant basis by setting up traps and scoring with near pin-point accuracy. He constantly scores high level shots, especially in unfavorable positions, when under pressure from tough opponents. One of his most impressive feats is when he performed a fake volley shot. His ability to control the ball is only rivaled by Itoshi Rin and Tabito Karasu and is one of the few things that escapes Rin's logic. Because of his natural sense for controlling the ball with his own body, Nagi is a truly prodigal talent, being one of the top players in Blue Lock despite only having recently started playing football, shortly before the program.

Trapping: Even before Blue Lock, Nagi has had exceptional trapping ability, being able to trap a cell phone in mid air, whilst jumping down a flight of stairs. This feat in itself was so impressive that Reo immediately recognised his talent for football and decided to make him his partner. He can trap with his entire body, with deadly efficiency, constantly finding ways to turn a bad situation into something favorable. Nagi has trapped the ball using his toes, heels and even his back, demonstrating the versatility of his trapping. He can trap virtually any object and he often uses his trapping to manipulate and confuse his opponents when making a run down the field; Which combines with his spatial awareness to place himself at the best point possible for amazing traps and follow up shots.

Flow State (Incomplete): Flow, as described by Ego, is the state of "total immersion" or "being in the zone". It is the mental state in which a person performing some activity is fully immersed in a feeling of energized focus, full involvement, and enjoyment in the process of the activity.

Nagi has entered Flow State numerous times in Blue Lock sometimes intentionally and others times unintentionally but he has still yet to master it. His most impressive feat in Flow State was the Fake Volley Shot.