His main goal before the start of the series was to become the best striker in the world and in turn the best player in the world but after leaving Japan and experiencing the professional league in Spain he changed his dream to becoming the best midfielder in the world.

Sae is an average sized but lean built young man with reddish brown hair and slim green eyes that are framed by an array of long lower lashes just like his brother, Rin. During the National Representative match he dons the Japan U-20 White #10 jersey with a black shirt underneath the jersey and some black gloves. 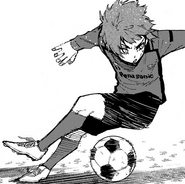 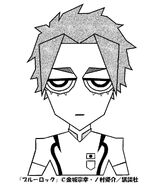 Since a young age, Sae has been cold, blunt, and very serious. He has only ever cared about becoming the best striker in the world and has only had time for things that get him closer to his goal. Sae can also be arrogant and condescending looking down on others even if they are older than him and have more organizational authority. He is egotistical in his football play but has shown to be able to restrain himself and play his position, not trying to outshine others unnecessarily.

Sae has a lot of pride as a football player, looking down on Japanese football and all who participate in it. Sae states he much rather die or play in Europe with a bunch of college students than play in the J- League or play on the Japan National Team. He is very confident in his skills and wholeheartedly believes that nobody in Japan is worthy of his skills as a teammate. He dislikes the fact that he was born in Japan, saying things like he was simply born in the wrong country.

Sae seems to easily command respect in a room from most people due to his reputation and skill even with his bad attitude and candid way of speaking and is able to handle and entice rowdy and tough people into listening to him or doing things his way. Though Sae is a difficult person he is not impossible to work with especially if he is getting something out of it. He, out of pure interest, decides to stay in Japan on a whim after hearing about the Blue Lock Project and even joins the Japan U-20 for the match against the Blue Lock Eleven. But when his interest is satisfied he has no problem abandoning those he deems unworthy of his time.

Even though Sae exhibits arrogance, he does not mind staying in his role, as midfielder and key passer. During the Japan National Representative match, Sae gave the Japan U-20 forwards every opportunity to score and only after repeated failures does he decide to score himself.

Sae has been described as having a cold and calculating play style. He creates constant ideal plays for his team using his passing and dribbling, essentially controlling the offense and fills in any gaps the defense may have by going to the most critical point using his vision. With every play he makes, Sae aims to crush his opponent quickly and efficiently, destroying them "beautifully".

Professional Football Technique: Sae is regarded as a genius player in the professional world of football. He plays football in Europe and is considered to be on the level of a pro but has not gone fully pro only because of the age requirements in Spain, at the start of the series. He is regarded as the best player in Japan and can easily fill a stadium with his name alone, due to his immense reputation. Even high level players like Rin Itoshi and Ryusei Shidou are a league below him.

Perfect Kick Technique: Sae has the ability to control the intensity, angle, speed, and accuracy of his kicks to an extreme level at any given point in time. Not only is he able to consistently perform complex passes using his superior footwork and technique but added with his level of skill he is able to perfectly manipulate the ball to the point his passes are easy to receive but hard to intercept or block.

Counter Dribbling: Sae's dribbling is "passive", in comparison with the more proactive dribbling of Bachira and Yukimiya. Rather than actively moving past defenders, Sae will observe the defender's rhythm and motions, before flowing past them in a counter. Sae's dribbling is the best shown so far, being able to effortlessly blow past the likes of Isagi and Bachira within one fluid movement. He is also shown to be able to overcome his brother Rin with relative ease, nutmegging him in each of their engagements. Rin noted that the tempo of each of his touches when he dribbles is incredibly fast, bolstered by his experience in Europe. Sae will often prioritize passing to progress the ball up the field, but when he wishes to play seriously, he changes his style to breaking through by himself with his dribbling, drastically increasing his options. When Sae gets serious, his dribbling is good enough to overcome Nagi and Isagi in quick succession (whilst nutmegging the latter), overcome Baro and Karasu at the same time, as well as avoid Rin's challenge. In addition to this, he nutmegged Yukimiya and avoided Hiori's tackle to break apart Blue Lock's formation.

Reflex: With his incredible reflexes, Sae is able to take into account all the conditions of the field and make decisive plays to get the ball down the field and in the hands of the forwards in the best way possible. Sae will determine who has the most "heat" towards the goal and play the ball to them, meaning he has no bias towards particular strikers. This incredible reflex makes Sae hard to read and stop, as he makes split-second judgements to constantly move the ball and change positions. It is this reflex which enables Sae to operate on the same wavelength as Shidou and exploit his abilities to their full potential.