Ryusei Shido ( , Shidō Ryūsei?) is a supporting character of the Blue Lock (Manga).

Shido unlike most forwards has no concrete dream of becoming the world's best striker but rather seeks to enjoy life to the fullest by playing football.

Out of the original 300 forwards chosen to be apart of the Blue Lock Project, Ryusei is an ideal candidate for the type of striker Ego strives to create and after the Japan U-20 match, Shido is ranked as one of the top players in Blue Lock. Shido currently plays as a regular on PXG during the Neo Egoist League.

Ryusei is a tall, tanned young man with spiky blonde hair having two strands falling on both sides of his face. He has pink colored irises with white slited pupils in them like a cat, and he is of similar height and body build to Rin Itoshi. He is very expressive and is often seen with a joker-like grin or smirk.

During the second half of the Japan U-20 match, Ryusei dons the #13 U-20 jersey with a black shirt under it and shorts. 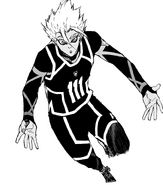 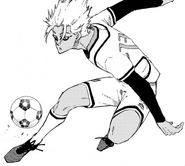 Ryusei Shido is another eccentric player in Blue Lock who has a strong penchant for violence or more specifically physical altercations. At the core of Shido's personality is a drive to play football not because it is a sport he enjoys playing but because to him it is a biological phenomenon that makes him feel complete. According to Shido, everybody wants to pass on their genes and leave their mark on the world. Scoring goals is Shido's way of doing that and it is his sole focus. He gets excited from playing high level football with other high level players and is bored if people cannot make him "explode" or don't "explode" themselves.

He can be considered a polar opposite of Rin Itoshi, being completely self sufficient and instinctive in his football. A noticeable trait of Shido's is his propensity for violence to get what he wants often being unwilling to work with most people (if anybody at all). He seems completely aware and content with the toxicity of his behavior and only feels slight remorse about it once he is electrocuted and locked up for being overly aggressive and threatening serious bodily injury onto others.

He seems to get over such feelings when he is released from his behavioral captivity by Sae Itoshi who asks him to join him in playing high level football and is cleared to act however he wants as long as it's for Sae's sake. When released from Blue Lock under Sae's supervision he seems to be even more openly violent and causes frequent quarrels with the members of the Japan U-20 specifically their ace player, Shuto Sendo, who initially doesn't respect Sae.

Shido can be openly friendly and even affectionate towards other such as Sae Itoshi who gave him the opportunity to play with him and evolved his level of play in the process, showing him a type of football he has never experienced before. Though he is prone to violence, Shido is able and willing to acknowledge other people's skills, praising Isagi for making the "best play" of the first game of the Third Selection (when Rin wouldn't) despite Isagi stealing a goal from him.

Shido's uncanny ability to be able to find the goal from anywhere in the penalty area, even without looking, is a testament to his skill as a poacher. He is an expert at producing goals out of nothing.

Superior Football Technique: Shido is one of two players in Blue Lock who have top tier stats, along with Rin Itoshi. During the Third Selection, he scored an average 2 goals a game, the highest of any player besides Rin. His physical dominance, ball control, power, and kick accuracy are only rivalled by a handful of players. Though Rin can be described similarly, what separates the two is Shido's confidence in scoring goals alone, even causing a physical altercation if his experience of the game is hampered in any way, whilst Rin combines with his environment to score. Shido's skill and ego are so advanced that he was recognized by Sae, a genius of the professional world, and asked to join him on the Japan U-20 team. With Sae's guidance, Shido is able to evolve his level of play to new heights, scoring outrageous goals and forming a deadly duo that the Blue Lock Eleven struggled to deal with.

Extreme Spatial Awareness: Shido's main ability is his extreme spatial perception. As opposed to other types of spatial awareness, that take into account player's positions and weapons, Shido's spatial awareness is geared towards the goal at all times. This is the key to his perfect scoring ability within the penalty area, since Shido is able to "see" the goal whenever he is in the penalty area, even without physically facing it. In addition to this, when he is in flow, Shido is able to perceive he location of the goal even outside the range of the penalty area.

Dominant Physicality: Shido is physically the strongest and most dominant player in Blue Lock. His physical strength alone is enough to nearly crush Gurimu Igarashi's skull and kick back Rensuke Kunigami, another physically dominant player. Shido is able to circumvent his opponent's defense, constantly leveraging his superior physical ability over them by breaking past them in an off the ball fight with his movements, using his body and theirs to create momentum to break past them, or by jumping over them altogether.

Reflex: Shido is able to reflexively take into account his position and his opponent's, to leverage his weapons for an ideal shot. His reflexes and speed grant him the ability to get to any point on the field faster than others could and his natural ability to use all of his body parts optimally allows for him to perform incredible physical feats that are uncommon even to those at Blue Lock. He has shown this multiple times, but most notably when he scored a goal in the Japan National Representative match, instantly reacting to Sae's high-speed pass. It is Shido's unrivalled instincts that make him such a potent scorer in and around the penalty area, establishing him as one of the most dangerous strikers in Blue Lock.

Drive Shot: An accurate and powerful shot that is usually used from range, serving as Shido's main method of scoring. Shido is able to perform a drive shot from a multitude of positions, whether it is unfavourable or not. Shido is able to avoid having to reset his positioning by using his superior physique and immense reflex to make the Drive Shot.

Ryusei entered Flow in the middle of the Japan U-20 match, being inspired by the passes he received from Sae and being pressured by the Blue Lock Eleven defense. This lead to him pushing his physical and perceptive abilities to their extremes and scoring a super goal.