Rin is the younger brother of Sae Itoshi and started playing football with him at a young age. Rin has played as a forward on every team he was on, always being one of the top players. In Blue Lock, Rin is regarded as the best player until he is officially confirmed to be the #1 player by Jinpachi Ego at the beginning of Third Selection. [10]

Rin is an ideal candidate for the type of striker Ego strives to create and after the Japan U-20 match, Rin is ranked as one of the top players in Blue Lock. Rin currently plays as regular on PXG during the Neo Egoist League. 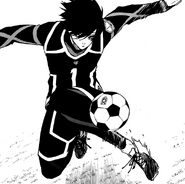 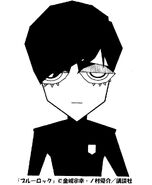 Rin is a surprisingly tall teenager with a slim but powerful build. He is noticeably taller than Yoichi Isagi who is older than him. He has black hair with a bang going across his face more in his right eye than left eye, slim teal eyes, and distinct eyelashes that he shares with his brother Itoshi Sae. As a young boy, Rin looks largely the same, his facial features just become more distinct as he gets older.

At Blue Lock, Rin wears the standard issued body suit (black with gray stripes) and tracksuit. During Second Selection, he wore Team Red's #1 jersey and wore Team A's #1 black jersey during the Third Selection. Only once the Japan National Representative match begins does he don an official blue Blue Lock player uniform with the jersey #10 and a captain's armband.

At a young boy, Rin was very innocent and in awe of his brother, Sae, wanting nothing more than to become a cool and strong player like him. He started playing football because his brother told him to, following his orders without question. As they played football together, Rin listened to whatever Sae said and adjusted accordingly. When Sae left for Spain, Rin found football was more difficult without his brother but strived to become just like him and replace him. This is where Rin's core style of play would begin to shift from his instinctive style, to a more logical style.

Initially, he was a good team player and captain for his high-school team, appearing to be on good terms with some of his teammates. However, due to his fallout with his brother, he has become cold, blunt, and overly serious. He is entirely focused on soccer, to an almost obsessive degree and is also very egoistic, as he is always putting his goals first over everybody and their motivations. Rin has a lot of pride as a striker, which borders on arrogance, since he frequently describes other people's soccer and way of thinking as "lukewarm" or "mediocre". These mannerisms and behaviors came from his brother; In an attempt to be like his brother, Rin copies his words and embodies his mindset.

Rin seems to respect almost nobody. He will only acknowledge your presence if you have a noticeable and annoying ability/influence on the soccer field. He seems to have no friends, only rivals (with only Isagi and Bachira seemingly being on generally even terms with him). By the time of the Japan National Representative match he is more noticeably talkative with the team, giving instruction on the pitch and conversing with Isagi specifically.

Rin commits to a routine of aftercare at the end of each and every day, to improve his physique, and he is often found in the training room doing drills or weights. Despite his arrogance and aloofness, Rin truly lives and breathes soccer, dedicating every waking moment to improving himself. This mentality combined with his personality is what makes him the top candidate for Blue Lock's supposed best striker. Everything Rin does is to enable him to beat his older brother and end the rivalry but after Rin moves past his revenge against his brother and his rivalry with teammates, he reaches a clarity in his decisions. He now aims to free himself from anything that ties him down and establish his own identity as an egoist, without relying on his brother, teammates or rivals.

When he was younger, Rin was an instinctual player but being trained and guided by his brother made him develop a notably logical and predictive style of playing. Whether on offense or defense, Rin's playstyle consists of him grasping the abilities of both his teammates and his opponents and forcing out their best plays and abilities, manipulating them in his efforts to score goals for himself.

Superior Football Technique: Rin is one of two players in Blue Lock who has top tier stats, along with Ryusei Shidou. During the Third Selection, he scored an average 2.5 goals a game, which was the highest among the Top 6. His spatial awareness, ball control, power, and kick accuracy are only rivaled by a handful of players. Though Shidou can be described similarly, the thing that makes Rin the best in Blue Lock is his willingness to cooperate with and create chemical reactions with his teammates, while Shidou scores goals completely independently. Rin's experience and techniques are advanced enough that he is able to play the role of captain, act as the focal point for an offense, play in defense and even overcome high-level defenders, using their own strengths against them.

Perfect Kick Accuracy: Rin's primary weapon is his highly accurate kick. His shooting/passing accuracy is near perfect, as demonstrated when he kicked two balls in such a way that they travelled different trajectories, yet still hit each other in mid-air. Rin's kicks are so accurate that he is able to score from long distance; Isagi implied that he could potentially score from anywhere below 35 meters, free kicks and even directly from corner kicks. Even when being physically pressured by players like Shidou Ryusei or Tabito Karasu, he is able to make a pinpoint shot. Oliver Aiku notes that his shot power and accuracy decrease when he uses his left foot, but in most conditions where Rin can get off a shot, it is on target. Rin needs space and range to set up his shooting pattern, the denial of which can result in his shot being off. However, he uses his other weapons to find himself with plenty of both, making him one of the top scorers in Blue Lock.

Spatial Awareness: Rin analyzes the entire field, including the positions of himself, his teammates and his opponents, in order to determine the best play. Rin's tactical ability and spatial awareness are at such a level that only Isagi can understand, counter, and rival his analytical ability. Rin is routinely able to predict the positioning and movements of other players, including Isagi, setting up traps and baits to lure them into unfavorable positions, intercepting their plays and setting up his own.

Off the Ball Movements: A term used to describe the moments where players are not in possession of the ball. Rin makes use of these movements to position himself in an opponent's blind spot, as well as to manoeuvre into goal scoring positions. He does this after determining the field of view of the players on the pitch, similar to Isagi.

Puppet-Controlling Soccer: Rin's main play style is about controlling and manipulating what his opponent thinks. After identifying the strengths and weaknesses of each player on the field, Rin uses his superior technique, tactical and physical ability to manipulate them into scenarios that will result in a goal. He can do this by using his own abilities against the opponent, or by combining his strengths with his team's. This style of soccer, pushes his team's abilities to their limits and beyond, resulting in highly complex and effective passages of play that often result in a goal.

Rin finally reached Flow in the final minutes of the Japan U20 match. Rin's style of football usually revolves around precisely calculating the weapons of the players on the field and drawing them out to utilise them, manipulating the field for the best way to score. However, when in Flow, rather than bringing out other player's weapons to efficiently utilise them, Rin draws out their weapons in order to shut them down. This usually involves Rin baiting them in some way, to use their strongest weapon, before overcoming them directly. While in Flow, Rin is noted to be several levels above his standard abilities. Rin was able to completely defeat Teppei Neru, Miroku Darai and Kazuma Niou in quick succession, using each of their weapons against them. Even Aiku could not stop him alone but when assisted by Shidou they were able to pressure Rin. Despite this, Rin was able to kick a powerful curve shot that missed only by a couple of inches. Rin is even able to neutralize Sae's dribbling as seen in the last minute of the U-20 Match.