Reo is the heir of the Mikage Corporation, with his total assets valued at 705.8 billion yen or $6.8 billion dollars. Prior to entering Blue Lock, he was a student at an elite high school, where he met his first long term friend, Seishiro Nagi, and he started playing soccer shortly after with him due to Nagi's amazing skills and Leo's craving to go further in football. Being a young man with everything, his one and only desire is to win the Football World Cup.

When he first arrived at Blue Lock, Reo was a member of Team V and arguably the second best player in his designated stratum. He is currently ranked #10 out of the original 300 forwards chosen to be part of the Blue Lock Project and is currently a centerback for the Blue Lock Eleven against the Japan U-20.

Reo is a tall young man with a lean and strong build. He has chin length purple hair (shown in the official colored art), usually tied in a high bun, letting two strands of hair framing his face. He also has bright purple eyes, also shown on the official art. 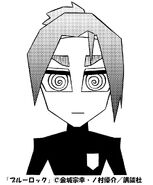 Reo is a very charismatic, sociable and joyful individual. During his high school days, he had lots of friends, was fairly popular and had many admirers. He was also the top student and participated in many sports activities. However, he found his life to be boring because of how easy it was and how he got whatever he wanted. But he found satisfaction in playing football to obtain the coveted world cup and would do anything he could to win like paying and babying a natural genius like Nagi to get further in football.

When playing soccer, he is very careful and analyzes his opponent's strengths and weaknesses, showing a very tactical mind.

For most teams he plays with Reo is an anchor and starting point for all plays his team performs and is a great player who is good at organizing plays based on knowledge of his teammates.

Dexterity: Despite not being involved in soccer from a very young age, Reo is very skilled at all aspects of the sport. He has excellent passing, shooting, dribbling, and ball control capabilities (among other skills). He also has high physical capabilities, with good stamina and speed. He is a well-rounded and excellent player, being considered as a 'Jack of All Trades'. On many occasions, it has been stated that if most people in Blue Lock have low skill levels in some of their stats and extremely high skill levels in other areas, then Reo has nearly perfect stats across the board.

The Chameleon (, Kamereon?): Using his all-rounder skills, excellent soccer abilities and sense, and his 99/100 stats across all his various skills, Reo is able to emulate the abilities that other players have demonstrated. Reo uses his nearly perfect skills to be able to understand how others, who are specialized in certain areas, are able to produce certain abilities. Using this understanding, he is able to recreate these abilities on his own. The only downside of this ability is that whatever skill Leo "copies" is only an imitation of what others use. He is not as capable in the abilities he copies as the original users, and he can thus never perform the skill equal to or better than the original user.