He is a hot blooded forward who's main goal is to become the best striker in the world and in turn a football superhero. When first arriving at Blue Lock he was member of Team Z during the First Selection.

He was ranked #50 out of the original 300 forwards chosen to be a part of the Blue Lock Project but was later eliminated from Blue Lock during the final games of Second Selection by Ryusei Shidou but instead of leaving the facility he walked into a mysterious "Wild Card" door that was open to him. After the U-20 match ended, Kunigami finally returned from the "Wild Card" door. 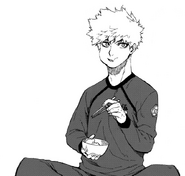 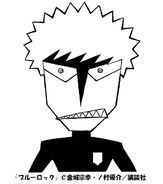 Kunigami is a tall fair skinned high schooler with bright, spiky orange hair that is styled in an undercut with auburn eyes. He appears to be very muscular and broad in the shoulders. At Blue Lock, Kunigami wears the standard-issued body suit (black with gray stripes) and tracksuit. During the First Selection, he wore Team Z’s blue #9 jersey and wears Team Z's gray-capped cleats. During Second Selection, he wore Team Red's #50 jersey. Once he was selected as a regular for Bastard Munchen during the Neo Egoist League he dons their #50 club uniform. After the U-20 match, Kunigami's hair has grown out more, he is noticeably buffer and he looks more gloomy and serious overall.

Kunigami has a very moral personality. He can be very serious about his football career, training, and way of living but also knows when to relax and enjoy life. He is seen as calm yet passionate when it comes to football and can be very rational and careful at times but can also be as stubborn as Raichi, who he tends to butt heads with. Kunigami will not let troublemakers and people who play unfair get their way when he is around; he almost comes off as a big brother. Even though he is serious most of the the time he can be very grateful and somewhat embarrassed when praised by others.

Meeting Ryusei Shidou had an impact on Kunigami's mindset and way of doing things. His moral and righteous way of playing was outdone by a more aggressive and instinctual way of play and he exited Blue Lock questioning Shidou's words when walking out of Blue Lock. After returning to Blue Lock, Kunigami is noticeably more cold and focused, having a whole new philosophy on how he plays football, striving to maintain his dominance on the field. Kunigami barely says a sentence to Isagi and not speaking to anybody else in the stratum.

Being a high powered left footed shooter, Kunigami is rare type of striker. Kunigami was tied for top scorer on Team Z during the First Selection, and only because another teammate cheated to get their goals to tie with him. When left unmarked he is guaranteed to make an easy goal. After emerging from his time in Wild Card, Kunigami's physical abilities have been noted to have skyrocket since his last appearance in Second Selection and he can now use both feet to score albeit his non-dominant kick being weaker. While the rest of the Germany Stratum Blue Lock players struggled to compare to the Bastard Munchen players, Kunigami easily kept up with them during training and ranked amongst the top 3 players in the entire stratum.

Finesse Shot: Kunigami has a near pinpoint power shot, specifically from his left leg, that he uses to score incredibly powerful shots with his standard range for shooting being within 28 meters.

Superior Physicality: Kunigami is one of the handful of forwards in Blue Lock who has a very strong and muscular physique and he uses this to his advantage when driving the ball down the field or marking players to defend. After returning from "Wild Card" and becoming a regular on Bastard Munchen for the Neo Egoist League, Kunigmai is more noticeably able to leverage his physique, by trapping the ball midair with his chest between two defenders and pushing past those defenders while holding them back so he could set up his own shot. Kunigami also has a better control of his center and his upper body reflexes.

According to the One Character-One question segment: