View source
Our community needs more information on this page! Can you help out? Click here to add more.

Oliver Aiku (オリヴァ ,, Oliver Aiku?) is a main supporting character of the Blue Lock (Manga). He was formerly the captain and a centerback of the Japan U-20 team.

Aiku is a tall man with shaggy brown hair with green ends and light facial hair. As a young boy Oliver was a relatively big player and as he got older he got bulkier. His facial structure stayed the same just becoming sharper and more refined and he grew facial hair. Aiku possesses the rare genetic condition, Heterochromia iridum, so his left eye is green and his right eye is purple.

During the Japan National Representative match, Aiku dons the official white with red trim U-20 jersey and shorts and wears the captain's band on his left sleeve. Under that he is wearing a black shirt and gloves. Aiku also wears black cleats with a pink edges. 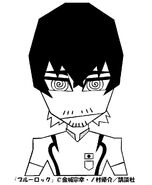 Aiku has been shown to be a womanizer when he invited two girls to karaoke on a date when they did not know about each other. They slapped him and left because of his rudeness assuming they would want to share him but he seems not to be too worried about woman.

Aiku lives up to his title as captain as he is the defender and peacekeeper of the Japan U-20 team and its players, as seen when he stops Ryusei Shidou from harming their Ace and also keeping their Ace and other members in check with his charisma. Despite his seemingly jovial and friendly manner, Aiku changes dramatically when on the field, becoming a dangerous and highly skilled threat. Aiku can be a bit reckless for he unnecessarily bet the fate of him and his team for a chance to beat the Blue Lock Eleven properly and prove something to himself. When the first half of the Japan National Representative is over, Aiku apologizes to his team for his recklessness and decides to play their trump card to prevent them from losing. Aiku also can be quite blunt; at halftime during the Japan National Representative match he states that he wanted to see how strong the team was, and tells the team that they're "weak" compared to the talented players at Blue Lock.

Aiku is not above showing his respect for those who have impressed him as he constantly commented on Blue Lock's ability during the U-20 match and when he congratulated and shook Yoichi Isagi's hand at the end of the match for beating him and scoring an incredible goal. After the game he seems to have no hard feelings but keeps his competitive nature.

The key to the Japan U-20's defense is Aiku being more versatile than the other defenders and being able to sweep up the ball or shut down the opposing offense altogether with his iron clad defense.

Professional Football Technique: Aiku is considered to be one of Japan's brightest talents, being the captain of the U-20, as well as already having an offer to play for an unspecified Italian professional club, in the Serie A. A testament to his professional technique is the fact that he went from being a respected centre-forward, to a talented defender almost seamlessly. The entire U-20 team is built with him at its centre, being referred to as the 'Diamond Generation'.

Spatial Awareness: Aiku has an incredibly large field of view, being able to take into account the conditions of every player in front of him. Isagi noted that Aiku was not marking him specifically, yet was able to intercept a pass to him, because he was able to adjudge Isagi's speed, as well as the source of the pass and the positions of every player. This wide field of view enables him to detect any threats to the U-20 goal and react instantly predicting any movements or surprise plays.

Dominant Physicality : Aiku also has an incredible physique which enables him to perform high level plays without issue. His strength was first demonstrated when he physically subdued Ryusei, a notoriously powerful player, without any issue. His strength is also demonstrated in his jumping ability, being able to reach great heights to intercept the ball. In addition to this, Aiku moves across the pitch with incredible speed, being able to sweep up any loose balls and cover defensive holes left by his team, as well as retreat to the center when needed.

Reflex: On top of his high spatial awareness, Aiku also has the reflex to immediately determine where the greatest threat to the goal is and the physical ability to go there without hesitation. It is the combination of this reflex and spatial awareness that makes Aiku such an effective defender, as he not only sees all positions of every player at once, but he also moves immediately (often ahead of the strikers) to intercept the ball.

Aiku managed to enter the Flow state during the match against Blue Lock, in response to Baro and Yukimiya's attack. Whereas normally he reacts to plays as he sees them happening, whilst in flow he can see and even feel the critical points in his team's defense, enabling him to move ahead of the game and cover those weak areas. This state also improves Aiku's one-on-one defending, being able to completely shutdown a player's offense by reading their every possibility and shutting down all their options like he did to Rin but when faced with skill that is above his understanding his defense falls flat without help.