When first arriving at Blue Lock he was a member of Team Z and he played as the goalie. Iemon was eliminated in the Second Selection, thus never made it to Third Selection. 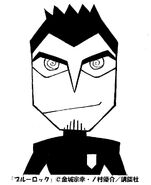 He's a very caring individual and likes to help his teammates when he can, as he trains with everyone else until the end for this exact reason. He also usually volunteers to arrange cones for practice and took over explaining tactics when Kuon was missing.

Iemon played as a forward in high school but in Blue Lock he only ever played as goalie. He was a decent goalie saving many goals during the Second Selection. His most crucial save was when Reo Mikage took a penalty shot.