Bachira is a whimsical forward who plays following his instincts and when first arriving at Blue Lock he was a member of Team Z during First Selection. His main goal was to find soccer rivals to play with, who also have a "monster" inside of them but that later changes to becoming the best striker in the world when he overcomes his childhood trauma.

He was ranked #7 out of the original 300 forwards chosen to be part of the Blue Lock Project before the Japan U-20 match.

Bachira is a fairly tall young man with a slim build and an oval-shaped face and a bob cut hair style. He has bright yellow eyes first shown in his official art and has chin length black hair curling at the ends with golden under-lights. When Bachira was younger his hair was only ear length and when he was in a junior football league he wore the jersey #8. During the Chiba Prefecture Tournament Bachira wore the #8 jersey for Namikaze High, which had a special bird design in the center.

At Blue Lock, Bachira wears the standard-issued body suit (black with gray stripes) and tracksuit. During the First Selection, he wore Team Z’s blue #8 jersey and during Second Selection, wore Team White's #16 jersey that later switched to red. During the Third Selection he switched between the Team A's black #7 and Team C's white and blue #7 jersey and he wears Team Z's gray-capped cleats.

During the Japan U-20 match, Bachira dons an official Blue Lock player uniform with the #8, that looks very similar to the ones seen in the first cover spread minus the Japan flag. When playing in the Neo Egotist League on FC Barcha, Bachira dons one of their uniforms. 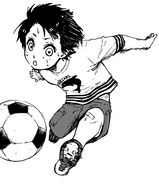 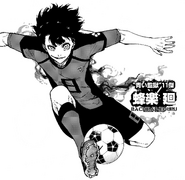 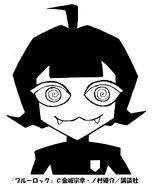 Bachira has a rather eccentric demeanor and personality. He is usually very energetic, cheerful and enthusiastic during matches, rarely losing his cool and will to play, describing soccer as something fun to play with others. Bachira immediately relates to Ravinho who is also eccentric and energetic being inspired by his way of playing football. He has a tendency to sleep in unexpected moments, such as shown at the start where, during the start of the tag test, he was found sleeping. He mostly oversleeps and ends up relying on Isagi or Kuon to wake him up, and then falls asleep during their team meetings; he's also been known to fall asleep during meals. When the Neo Egoist League starts, Bachira takes his football training more seriously in an effort to become the world class egoist he imagines himself to be and edge closer to becoming the best in the world. Bachira now actively weight trains and mediates

During his childhood, he was actively bullied because of his eccentric personality and exceptional skill in football, which resulted in a form of trauma where he is terrified of being alone. This trauma causes Bachira to create an imaginary friend who is a "monster"; More specifically a football monster because it motivates Bachira and his plays in the game. Only after he comes to Blue Lock does Bachira start facing his trauma for he finds people he is similar to and can call a friend, like Yoichi Isagi. Bachira can be seen casually befriending all sorts of people despite his somewhat strange demeanor including Isagi, Rin, Chigiri, and Kunigami.

After the rematch between Isagi's Team White and Rin's Team Red, Bachira has moved past his previous trauma and has decided to be more confident and dominant on the field. He wants to become the world's best striker as well, who scores only for himself, and thus will only pass someone the ball if they have the potential to excite him and help him play the kind of football he wants to play. Bachira has also steeled his resolve for moving forward in Blue Lock; no matter the challenge Bachira looks optimistically at the situation resolving to get stronger and reach the peak of each trial ahead of him.

Bachira's dribbling technique allows him to break through most defenses with only high level players being able to stop him but it is very rare to see the ball stolen from him. Team Z heavily relied on his dribbling ability to get the ball down the field during First Selection. His dribbling is rivaled by only a handful of players in Blue Lock and mixed with his key passing skill he has proven to be a much needed asset on any team. After the initial training of the Neo Egoist League, Bachira has evolved his dribbling by moving away from proactive dribbling to more counteractive dribbling, preferring to read his opponents movements first, maturing in the way he moves down the field.

Elastic Dribbling: Bachira's dribbling style relies on his supreme technique and creativity to get through other player's defenses. His dribbling ability is so advanced that Isagi has noted before that it would be impossible for him to outright steal the ball in a one-on-one.

Key Passing: Bachira is also a very talented passer, enabling him to assist many different goals. He has, on multiple occasions, gotten an assist by crossing from the wings, as well as passing from the midfield. He also has demonstrated a range of passing techniques.

Bachira has unintentionally and intentionally entered Flow State numerous times during Blue Lock, as early as the First Selection. In this state he has performed a triple nutmeg on some of the best players in Blue Lock and has broken through their defense with ease almost scoring all by himself if not for the confidence and respect his opponent had in his skill which caused them to intercept him.

Monstrance: When he enters the Flow State, Bachira enters a challenge-centred trance, performing techniques incredibly quickly, including multiple feints and moving purely on instinct. Since he moves without conscious thought, it is incredibly difficult to predict and stop for the defenders. In this state, Bachira was able to easily overcome the U20 defenders and even Oliver Aiku. Bachira has evolved this further by being able to go into Monstrance at will and even combining his explosive style with the free and flowing Ginga style of Ravinho being able to produce even more explosively creative plays.