View source
watch 01:36
We're Getting Mutants in the MCU - The Loop
Do you like this video?
Play Sound

He was ranked #5 out of the original 300 forwards chosen to be apart of the Blue Lock Project before the Japan U-20 match and currently plays as a regular on Bastard München during the Neo Egoist League. 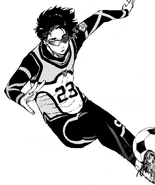 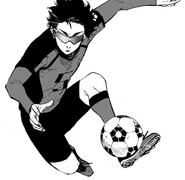 Yukimiya is tall, with a slim yet slightly muscular build. His hair is black and stylized. When outside of a match it is groomed and straight, whereas during a match it is more wild and messy. He also wears round spectacles outside of games, but a pair of specialised sunglasses when he is in a match. All this indicates that Yukimiya has an acute awareness of his own style and appearance at all times, which is supported by the indication that he models.

During Second Selection, he wore the Team Red's # 23 jersey and during Third Selection,, he wore Team C's #23 jersey. When the Japan National Representative Match begins he dons the official Blue Lock uniform with the jersey #5.

Yukimiya is highly confident in his own abilities, declaring himself the strongest player in Japan, when it comes to one-on-one battles. He is also a likable and charismatic personality, appearing to make friends easily, like with Nagi. In addition to this, Yukimiya likes to make banter even with his opponents, indicating a playful element to his personality.

Yukimiya claims that he is a pacifist, which forms part of his ego, since he sees the easiest and most peaceful way to score would be to do so himself. He is also inquisitive, often being the first to ask questions of Ego, about his selection criteria.

Rigid Dribbling: In contrast with Bachira's technical dribbling, Yukimiya's dribbling relies on his own physique, to push past opponents with power and speed.

1-on-1 Emperor Style: Yukimiya's core style involves bringing a confrontation to the individual level, where he can use his rigid dribbling to get past his opponents in succession. He has shown that he can overcome Rin and then Shidou whilst doing this, proclaiming that in a 1v1 he is the strongest player in Japan (although this was likely a boast). Reo mentioned that Yukimiya was a hardcore infighter, with his physique being key to his dribbling ability. It is suggested that, at least within Blue Lock, there is no player he cannot dribble past. However, this style can be countered by simply bringing the encounter back to a 2-on-1, as shown when Rin used Igarashi to overcome Yukimya's dribbling.

Gyro-Shot: This is a high shot, with incredible spin, allowing it to drop sharply in mid-air, while moving to the outside. When Yukimiya used this shot, it was very nearly going to score, if not for Aryu and Nagi reading its path. Based on what Reo said, its range is at least 30 meters.

Yukimiya entered the flow state, whilst resorting to his street dribbling during the U-20 match, enabling him to break through their defense and launch a gyro shot, quickly changing his aim at the last second.

Street Football Style: In contrast to his usual 1-on-1 style, when Yukimiya accesses the flow state, he can dribble with more precise movements, cutting into the spaces between both friends and foe. Through focus and analysis, Yukimiya can determine the best route to take in order to penetrate the defense, yet still adapt his decision-making, running through people as if dodging obstacles in the street.