View source
Our community needs more information on this page! Can you help out? Click here to add more.

When first arriving at Blue Lock, he was a member of Team Y during the First Selection and he was determined on surviving Blue Lock with the skills he already had but after losing to Yoichi Isagi in the First Selection, he decided to stop being afraid and change to get better so he could survive Blue Lock.

He is currently ranked #63 out of the original 300 forwards chosen to be part of the Blue Lock Project and is starting as a centerback for the Blue Lock Eleven against the Japan U-20.

Niko has a lean body with long black hair that covers both his eyes. Niko is of average build and size so he does not appear to be a very strong player. His hair covers his eyes but he is still able to see through it enough to play high level football. 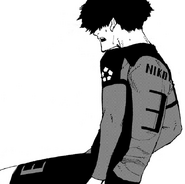 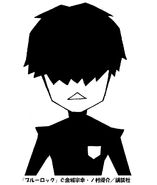 Niko is incredibly confident in his ability to read the field, asserting his superiority to Isagi during the game against Team Z. However, Niko is not prone to arrogance, as he seems to appreciate people who demonstrate the same ability as himself. This could be seen when he showed Isagi respect during their game, upon realising that they possess the same eyes. This has translated to a friendly rivalry with Niko aiming to one day play Isagi again and defeat him.

Niko has also shown that he is willing to adapt his mindset and playing style, if it means evolving further. After losing to Isagi, he began focusing on his own goals and staying in the spotlight. During the U-20 match, he also grew to enjoy playing as a defender, where he uses his eyes to crush defenders. This demonstrates Niko's willingness to change both his style and his role for the sake of his ego, without issue.

Niko's vision and ability read the entire state of the field makes him a formidable defender. He can take in most parameters of the field, as well as factors like the style of pass and off-the-ball movements of other players, in order to determine where the greatest danger is and exterminate it.

Spatial Awareness: Niko analyzes the entire field, taking account of both his allies and opponent's weapons, positions and actions to be able to determine the next play and respond accordingly. Niko's ability to read the field was rivalling by Isagi's during their match, who is himself one of the most tactically aware players in Blue Lock. Indeed, Isagi himself has on occasion been impressed with the sheer scope of Niko's vision and ability to read the state of play. With his tactical ability, Niko organised Team Y's defensive playstyle, as well as their offensive strategy, acting as the core of the team, breaking up the opponent's attacks and initiating his own team's. Niko has also demonstrated that he can read the way a pass was made and its flight path, to determine the best way to intercept it.