Chigiri is a forward prodigy who was chained down by an injury in his past but let go of his fears while at Blue Lock so he could continue playing football wholeheartedly. When first arriving at Blue Lock, Chigiri was member of Team Z. Chigiri spent half of the First Selection avoiding participation or keeping it to a bare minimum but when he was motivated by Isagi in Team Z's third game, he decided to let go of his fear and play football to become the world's best striker like his rivals.

Chigiri is a young and lean man with reddish pink hair and deep pink eyes. Chigiri from a very young age has always had a very feminine face, as shown by his long eyelashes and soft facial features. He is often referred to as "Kunoichi" or "Princess" due to his feminine appearance and ninja like speed. He looks very similar to his mother and older sister. Chigiri's hair has always been only neck length until sometime after he entered high school when he let it grow to shoulder length. Chigiri's hair goes past his shoulders and has one long bang that sweeps to the right side of his face. During games, he tends to braid one side of his head so that it doesn't get in his face.

At Blue Lock, Chigiri wears the standard-issued body suit (black with gray stripes) and tracksuit. During the First Selection, he wore Team Z’s blue #4 jersey and wears Team Z's gray-capped cleats. During Second Selection, he wore Team Red's #44 jersey and that later switched to white when Chigiri joined Isagi's team. During the Third Selection, he wears Team B's #44 white jersey. It is not until the match against the Japan U-20 does Chigiri don an official Blue Lock player uniform with the #4, that looks very similar to the ones seen in the first cover spread minus the Japan flag. 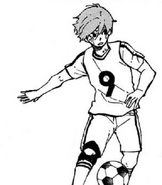 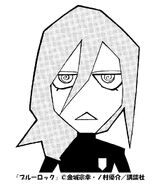 Chigiri from a very young age has always thought himself superior to others due to his naturally strong muscles, amazing skill in football, and his outstanding speed. He for awhile looked down on those who got in his way or annoyed him but was mostly modest. Only when he tears his ACL does his sense of superiority start to crumble and due to being harrassed by the Wanima Brothers he becomes afraid of playing football wholeheartedly. He becomes so afraid of never playing football again that he rather find a reason to quit than to persevere for his dream.

When retaking a hold of his ego and ambition, Chigiri has shown to be a persistent and stubborn force on the field. He always strives to leave an effect on the field, which causes other players to notice him and acknowledge his abilities. Chigiri is shown to have great focus being a player who is constantly running through tight spaces, between players, and even switching from dribbling to passing

Chigiri's natural physical disposition allows him to run at incredible speeds compared to most players and along with his great focus he is able to keep control of the ball and his speed while moving through tight spaces, between players, and switching between dribbling and passing seamlessly.

Immense Speed: Chigiri has naturally strong leg muscles and expert footwork, which enables him to run down the field at incredible speeds. Chigiri is generally considered to be the fastest player in Blue Lock and only players with immense speed, like Ryusei Shidou, Eita Otoya, and Zantetsu Tsurugi can compete with him. While his speed is rivaled by a handful of players, as of yet, nobody has been able to beat him in a direct contest of speed. Chigiri has even sped past Oliver Aiku, the #1 defender of the Japan U-20. This speed, combined with his perception and awareness of positioning enables him to choose the appropriate breakthrough point in an opponent's defence and to speed through. In addition to this, Chigiri has demonstrated the ability to directly kick the ball and follow it, resulting in a wide dribble that can break apart an enemy's formation. It is for these reasons Chigiri has one of the best breakthrough abilities in Blue Lock.